Thank you for your patience while we retrieve your images.

Created 25-Jun-17
Modified 25-Jun-17
9 photos
There is a rounded tenon above the breech inside the receiver that suggests a later model barrel, which has some rust. But the crown looks correct and the edges of the 3-groove bore are in good shape. Proof marks on the barrel include an “A”, a “P” above an eagle’s head and what appears to be another worn “P” near the seam between barrel and receiver, though it might be an “F”. There is what looks like an “R” just above and partly covered by the stock on the left side of the barrel.
I can see no index marks on the right side of the barrel or receiver, but they may be hidden by the stock.
I don’t know how to evaluate the receiver gas port shaping. The cuts under the receiver hinge are square like the early model, but the gas porting doesn’t seem to match either the old receiver or the later model as shown in Poyer’s book. A knowledgeable collector on the trapdoor collector forum believes that it is likely a model 1870 50-70 receiver.
Categories & Keywords
Category:
Subcategory:
Subcategory Detail:
Keywords:
© Russ Norwood Photography - 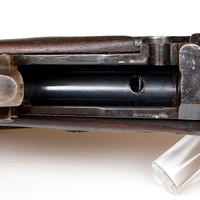 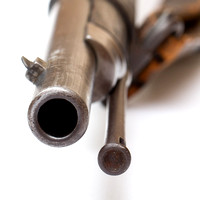 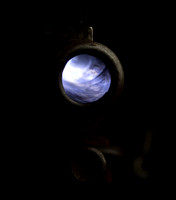